How many of you know what a Neo Geo Pocket Color even is?

I first found out about that weird little brick around the time I was in middle school and was SUPER into emulating games. This was also around the same time I became big into fighting games and was just discovering what SNK was all about so I used to play a lot of this systems library on my PC all the time, though I primarily stuck with their fighters. There was something about the pixel art that really drew me into it, so much so that I used to color in and edit NGPC sprite sheets for fun. When I got a little older though and became much more into game collecting I actually found a ton of NGPC games at a flea market for $20 by the lot and that spurred me into finally getting one for myself! The 8-way analog stick is really weird and it sucks that there isn’t any backlight but I love this little thing so much.

This story has a point, I swear

As much as I loved this thing though? I knew it was always going to be stuck in its own time since this thing is NICHE niche. Barely anyone bought the stupid thing and a lot of the games for it are pretty expensive but then last year SNK made the NGPC version of Samurai Shodown II playable as a pre-order bonus for the Switch port of Samurai Shodown (2019) and it had me curious. “Are they actually referencing the Neo Geo Pocket Color? Why?” That question would finally be answered fucking…..like 6 months later when SNK just decided to shadow announce AND release SNK Gals’ Fighters on the Nintendo Switch eShop. I mean, I’m not complaining since this game is like $100 without the box but…

I bought it the moment it dropped on the eShop because I’m a clown.

SNK Gals’ Fighters is a 1-on-1 fighting game not unlike SNK’s other fighters on the NGPC (SNK vs Capcom: Match of the Millenium, Samurai Shodown 2, etc.) and while it still plays fundamentally the same as the other games, I personally found it to be a more pleasant experience. Maybe it’s because I was playing it with a controller with a d-pad as opposed to a makeshift thumbstick but I thought this game controlled like a dream. Since it premiered on a handheld system with 2 buttons there’s not a lot to work with in terms of combos or anything like that but they found a way to get around it. Both the punch and kick buttons have pressure sensitivity ala Street Fighter 1 so you have both light and heavy levels for your attacks and specials which helps make the game feel like a truer fighting game experience. The game also has a great sense of humor.

The roster for SNK Gals’ fighters is surprisingly big and diverse for a simpler handheld game as no two characters play alike or even follow the same gameplan. The game hosts characters from the King of Fighters, Samurai Shodown, Last Blade, and even a few unlockable characters such as the games final Boss, Miss X, who is by far my favorite to use. Outside of the unlockable characters, though, there isn’t that much to do. The game only features a simple arcade ladder, vs, and a training mode and while I understand there’s only so much you can do with a small game like this I would have at least appreciated a few minigames like in SNK vs Capcom. One thing I especially found odd though was the lack of a gallery or any extra features. In terms of this being a re-release, this is VERY barebones and unambitious in terms of what it sets out to do, which is a damn shame because I would have loved to see a clean version of this games box-art and its concept art. The absolute biggest misstep though? This. 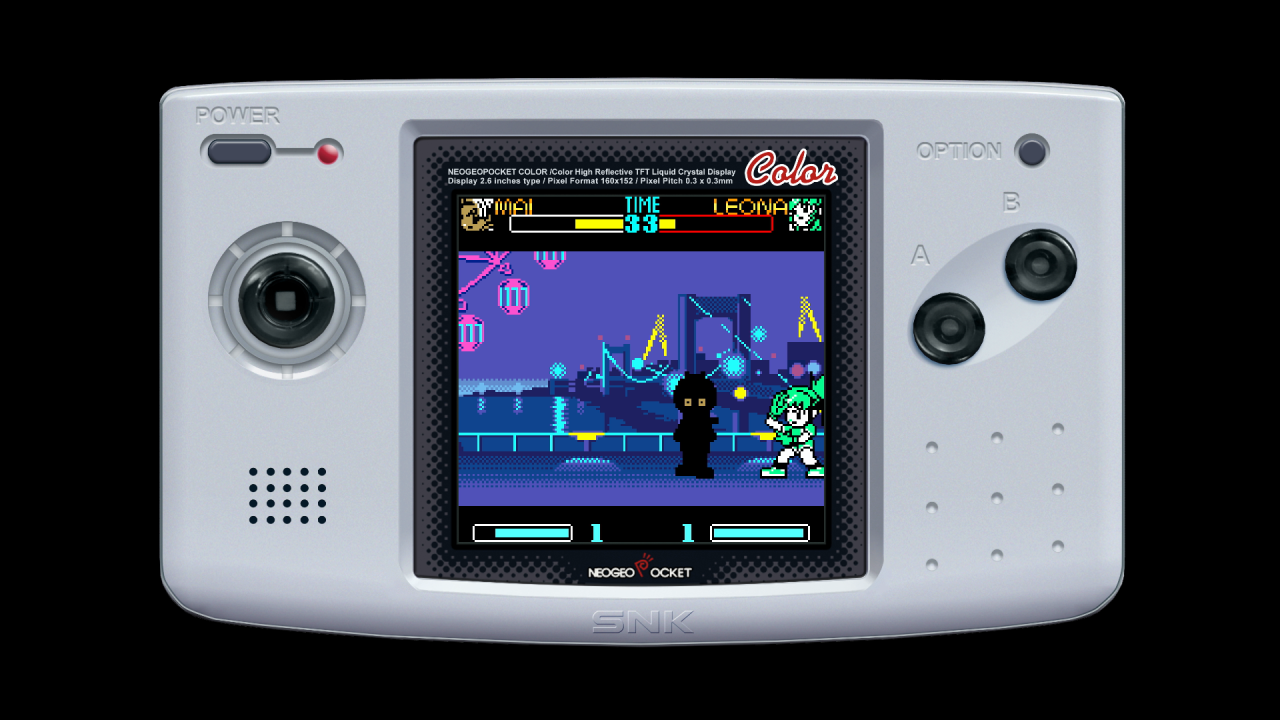 What the hell is this?

For reasons that I can only DREAM of, Code Mystics decided that instead of presenting this game in widescreen with selectable filter and border options, you know..like a normal re-release, they decided to present the game on a .jpg of a Neo Geo Pocket Color. Why? WHY would you do this? They don’t even give you an option to remove it, only to zoom in on the image and change the NGPC skins to a different color. I mean I guess it’s a cool novelty but in my opinion, it should have just been an option, not the standard way the game is displayed. You know what game got it right? Pocket Rumble. Full widescreen, nothing cut off, pixel perfect, if the game was in 4:3 I’m sure it would have selectable borders. Absolute perfection. You should really get Pocket Rumble, by the way. It’s damn good if you’re looking for that NGPC experience.

Overall though? SNK Gals’ Fighters is a cool get if you enjoy the wackier side of fighting games and want to experience a cool novelty from the past. Sure I wish the game had more to do in it but it’s, unfortunately, a product of its time and I can’t really blame it for that. I also wish the game had a gallery or even a mini-museum so you could view endings and things of that nature but I guess it isn’t a big deal since the game is only $8. The display though this is the only thing I can call outright bad but if this kind of thing doesn’t bother you then go ahead and pick this game up. It’s a little simple and a tad bit wacky, but it’s a great way to pass the time.