Review: Dragon Ball Z: Kakarot-Too Much Of An Okay Thing

I now know more about Dragon Ball now than I ever had in my life and that’s not a good thing.

What on earth do you want me to say about Dragon Ball? You know it, I know it, we all know what this series is. I watched it on Toonami as it came out, I bought several somewhat mediocre video games, I watched all the movies, I even kept up with the rocky series that was Dragon Ball Super. Dragon Ball contains some of the most recognizable characters in not just anime, not just manga, but all of pop culture. The series is iconic in every sense of the word and will probably be around long after the sun has gone out. With that being said though, the series is also home to some VERY mediocre video games and is highly prone to retreading old territory with each story based entry, and that is no different from this year’s game: Dragon Ball Z: Kakarot. 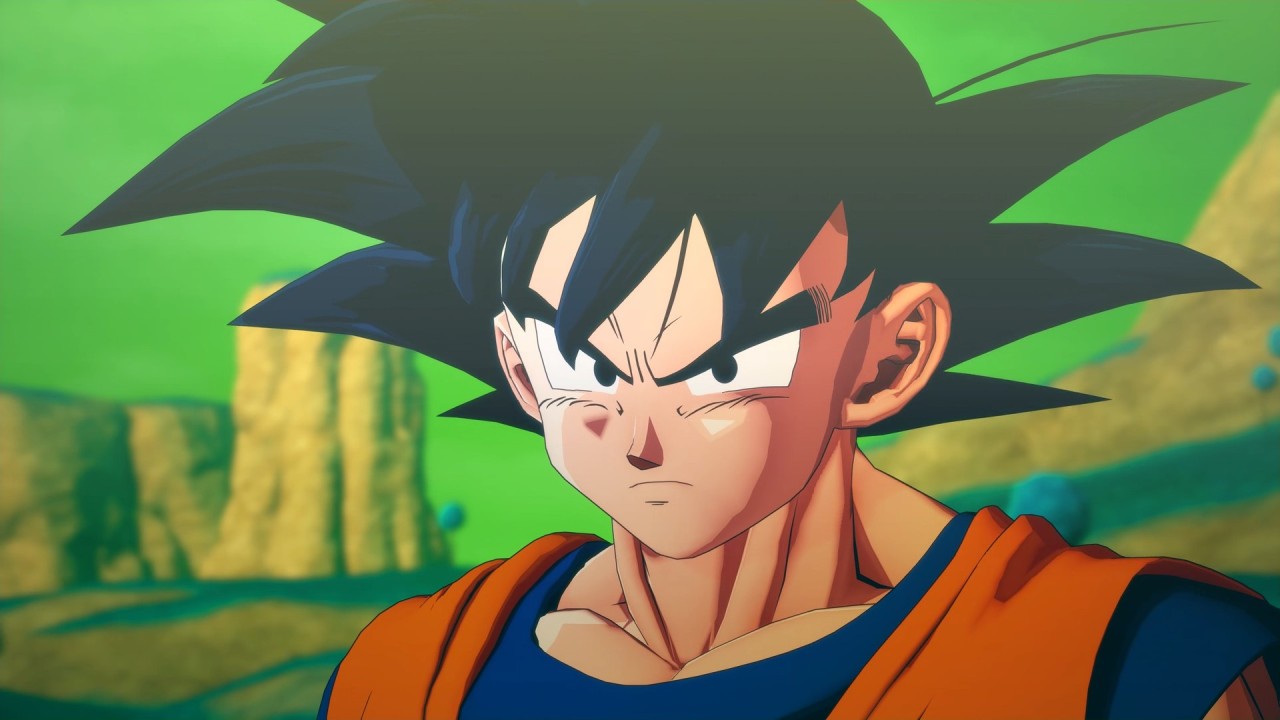 There you are, you dumb bastard.

I was initially drawn to this game because growing up I was a really big fan of the Legacy of Goku series, a trilogy of action RPG’s on the GameBoy Advance. While not perfect, I thought they were fun enough games but there was always wanted something more. See up until the release of Dragon Ball Xenoverse I actually didn’t buy a lot of Dragon Ball games because they were mostly fighting games, very stale and flaccid fighting games at that. I always wanted them to go back to the RPG genre and REALLY go deep into Dragon Ball’s lore and provide a massive experience, unlike any other game at the time I thought Kakarot could provide me with that. I thought the idea of a next-gen open-world RPG with Goku sounded fun, I mean yeah we’d still be getting the same story we’ve seen a thousand times in other games but as long as the gameplay was engaging enough and it provided me with lots of things to do I would be more than content with it. I….sort of got that? Kind of? It’s more or less Legacy of Goku expect with better combat and memorable set pieces. 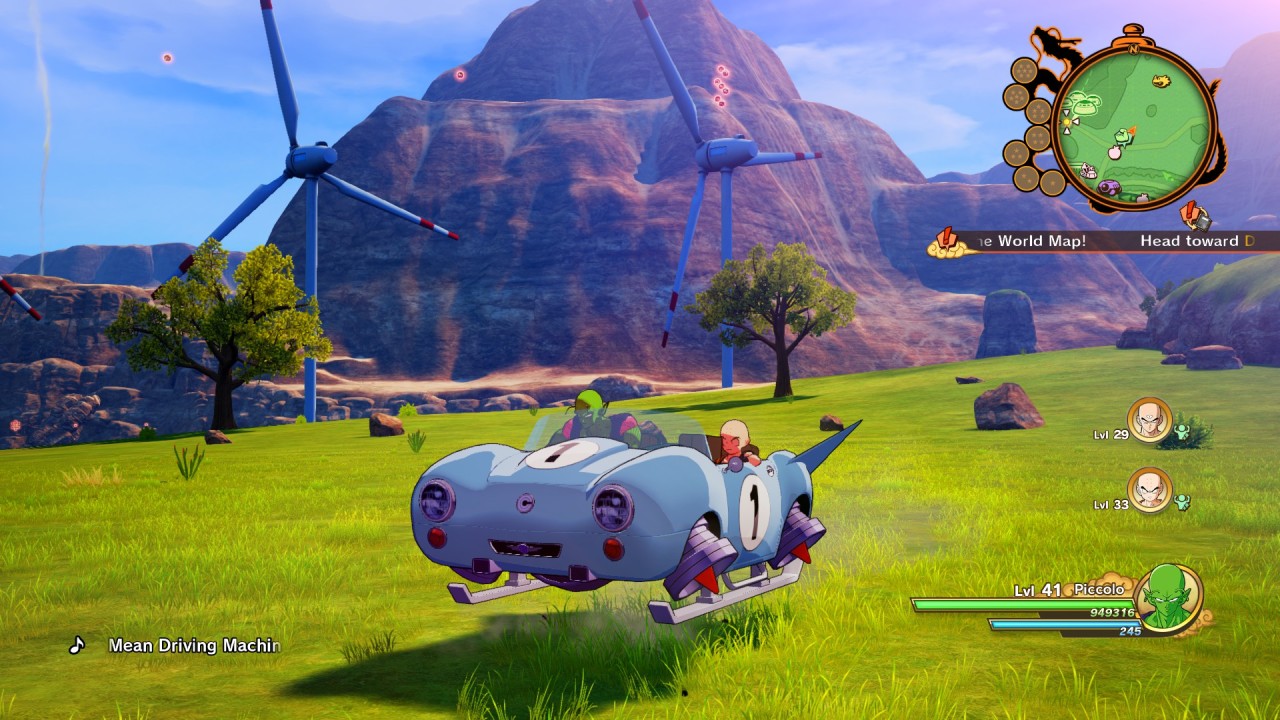 Can’t do this on GBA.

It seems like I’m taking my time getting to the meat of this review, right? Like I’m going rather slow and beating around to bush before I get to the point? Well, I’m doing that because that’s what the first eight fucking hours of this game did to me. Kakarot absolutely refuses to let the player have fun on their own terms and until you send Vegeta back to space and I was getting really burnt out because of it, but thankfully the game really opens up after that and it lets you go out and explore the world and for what it’s worth? It’s fun enough. The combat is fun in a caveman kind of way, just push buttons and cool things happen, and you can go to training ground spots on the map and unlock extra special attacks you can use on your adventures. You can get extra party members and use their abilities to your full advantage and some of the bosses have really fun set pieces and cinematic attacks that help make the fights feel dynamic and engaging. There are also side missions sprinkled throughout the game that let you unlock “Community Medals” of character’s faces and you can add them onto a board to get special perks and bonuses. Some medals also get extra boosts if you pair them with other medals which not only incentivizes you to mix and match for the most optimal set possible but to continue doing side quests to unlock more. They have cute little dialogue quips too and it’s wonderful. It also helps that the side content in this game is wonderfully written and filled with a great amount of fanservice and pockets of humor. Not even kidding when I say that the side quests are my favorite aspect of the game.

This was my favorite side-quest by far.

Outside of the combat and side quests, you can also hunt animals for food so you can have Chi-Chi make you meals and permanently increase your stats, you can hunt for minerals so you can have Bulma build you vehicles so you can participate in time trial races, you can hunt for memorial spots and see little snippets of Dragon Ball’s pre-Z lore, you can hunt for Z-Orbs so you can upgrade your characters, you can hunt for Dragon Balls so you can wish for beaten bosses to come back so you can fight them again THERE’S SO MUCH TO DO IN THIS GAME…..it’s just a shame that it isn’t very much fun. Half of the things you can do outside of story-related content is utterly pointless and only serves as a pointless distraction from your main goal so that just begs the question: What is the point of this game having an open-world. It’s not even a true open-world either since all the maps are segmented mini-areas. While the addition is good in concept the game doesn’t have a sense of cohesion since everything is blocked off by exit walls and loading screens and that makes traveling to where you need to go feel less like an adventure or more like selecting a stage in a platformer. It’s especially bad since every map is BARREN with nothing to do but collect items you don’t truly need and fight enemies that practically drip feed you EXP. While I suppose it’s not bad by any means I just got sick of traveling and warping between areas. 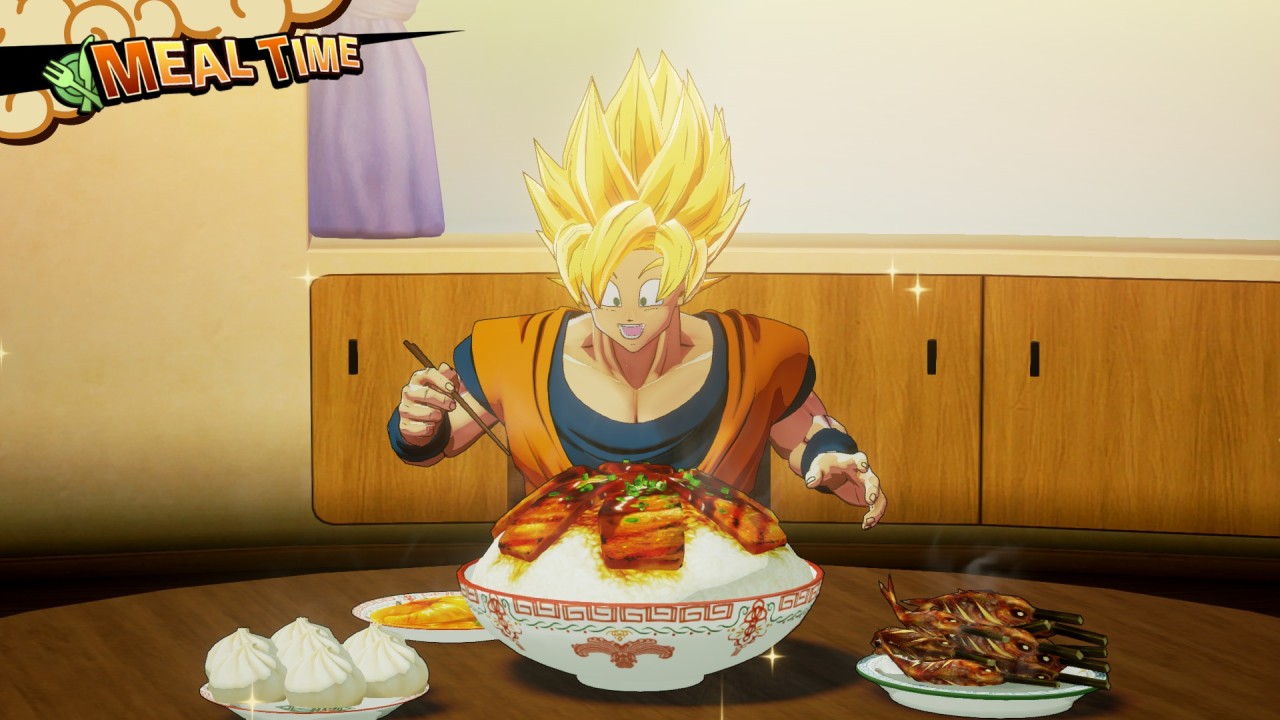 Getting enough food for a full-course meal is really satisfying.

Now what about the story, the basic thing you need to get right in an RPG?

Dude, it’s fucking Dragon Ball what do you want me to say here?

It’s the same story we’ve been getting in these games for the past 30 years and outside of a few things, nothing’s really changed. I WILL say though that the pre-rendered cutscenes are positively gorgeous and showcase amazing uses of lightning, effects, and model manipulation to give these characters a truly animated feel. There were times that this game rivaled Dragon Ball Fighterz, THE BEST LOOKING DRAGON BALL GAME, and really gave its attention to detail a run for their money. The actual in-engine cutscenes though? They’re an embarrassment. Characters constantly use canned animations or refuse to animate at all. It’s not helped that the models themselves look really awkward at times since the in-engine lightning messes with the shadows on the characters (ESPECIALLY the NPC’s oh my god). Also, I want to take a second and talk about the audio for this game because it just got under my damn skin. Right after this image because I need to break apart these paragraphs. 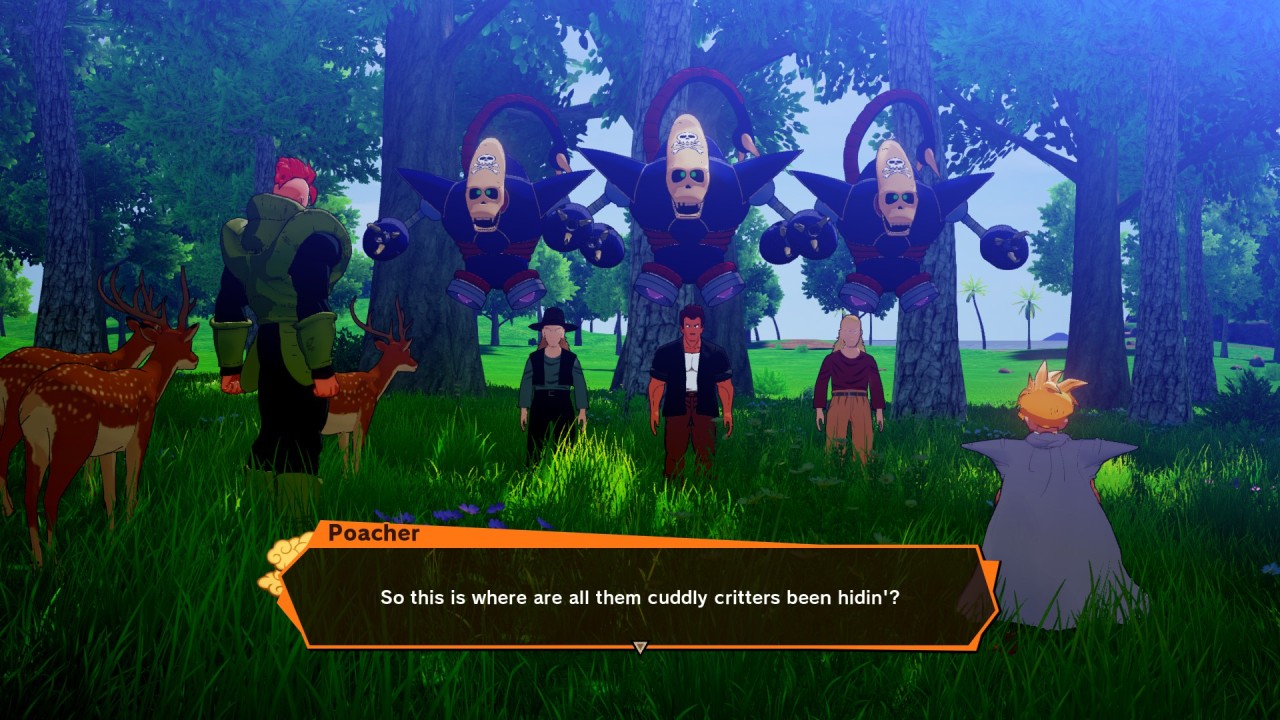 I hate the music for this game. The soundtrack mainly consists of remixes of the original anime’s compositions but they’re not only played ad nauseam, but they also don’t even sound good. I don’t know what kind of instruments they used for this game but they either should burn them or hire a different composer because they are EAR GRATING. The awkward-sounding violins, the oddly low-key horns, the AWFUL saxophone, it’s all bad. I swear to god you will get sick of hearing that orchestral remix of “Cha-La Head-Cha-La” by the 10th time you’ve heard it. Also, the game in genal has a lot of audio issues, at least on the version I played. I own the PC version and some cutscenes just played without sound effects and wouldn’t play any at all during certain enemy encounters. Maybe it’s better on console and I guess it’s not a big deal as a whole but it was something that bothered me enough to write about it.

Also, the English dub lines repeatedly differ from the in-game dialogue boxes and that is a problem that has persisted throughout this series since Xenoverse 1 and I want it to stop.

Sometimes ki-blast sound effects wouldn’t even play for me.

Dragon Ball Z: Kakarot despite my many, many, many, MANY Complaints is an okay game for Dragon Ball fans. It has enough fanservice and charming writing to keep you going and the gameplay is very engaging in a simple way. Would I recommend it at all price thou-No. There is not enough substantial content here to warrant paying for it at full price, charm can only get you so far when you aren’t that interesting. If you’re a Dragon Ball fan I suggest getting it when it goes on sale in about 5 months but if you aren’t into the series at all? Stay away from this game. It’s not going to sell you on Dragon Ball and you’re much better off playing a better RPG or even Dragon Ball FighterZ. At least with that game, you can have a fun visual and gameplay experience. I might go back to this game later when I’m less burnt out on it but for now? I’m so tired. 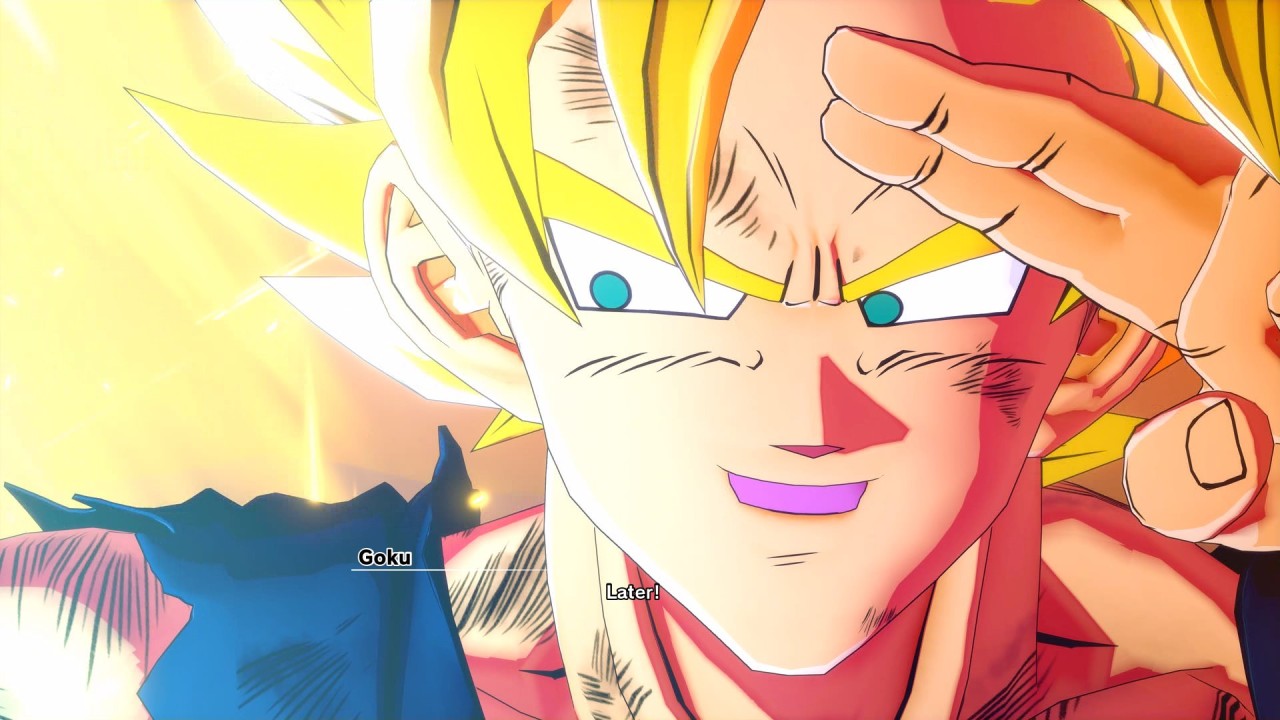