Review-Pokémon Sword (And Shield I guess)

Boy, this game sure did cause a stink, didn’t it?

I wasn’t going to pick up Pokémon Sword (And Shield I guess) originally. It didn’t have anything to do with the controversies surrounding it or anything, though it didn’t help, it just wasn’t on my radar. Don’t get me wrong I enjoy Pokémon every now and then but there has never been a time where I’m DYING to play the newest entry as it comes out. I usually just wait a bit and get it later down the line. It also didn’t help that this came out when I was SWAMPED with other games and reviews (I was still working through Dragon Quest XI at the time) so I saw even less of a reason to purchase it….then I saw my friends posting pictures from the game and I saw a lot of the new Pokémon designs and I went out and bought it.

I have no self-control and I hate myself a lot.

She was worth it.

Pokémon Sword (And Sheild I guess) sure are Pokémon games and that can be really good or really bad depending on how you view that statement. It’s very simple, VERY easy, and a bit too straight forward. Now when I say simple I am mainly referring to the single-player side of the game. I know dick all about the competitive scene for this series so I can’t comment on how in-depth the mechanics are but the story difficulty and the things you need to do for progression aren’t exactly difficult. The combat in Pokémon games have always been really simple and they never really improve it outside of adding a few gimmicks here and there but that doesn’t mean its bad or anything. Pokémon still has winning formula and I honestly don’t have an issue with it since it makes the game a lot more relaxing. The majority of my playtime involved me just sitting back with a drink and letting the world of Pokémon Sword (And Shield I guess) envelope me and I think that’s this game’s biggest strength. The Galar region is beautiful and engrossing. Every town has such a distinct theme and look to it and the games Wild area, while a bit narrow in scope, still looks fairly vast and being able to just run into high-level Pokemon in this large playfield filled with other players is really awesome. I really do mean it when I say that this game is beautiful by the way I mean look at this shit. 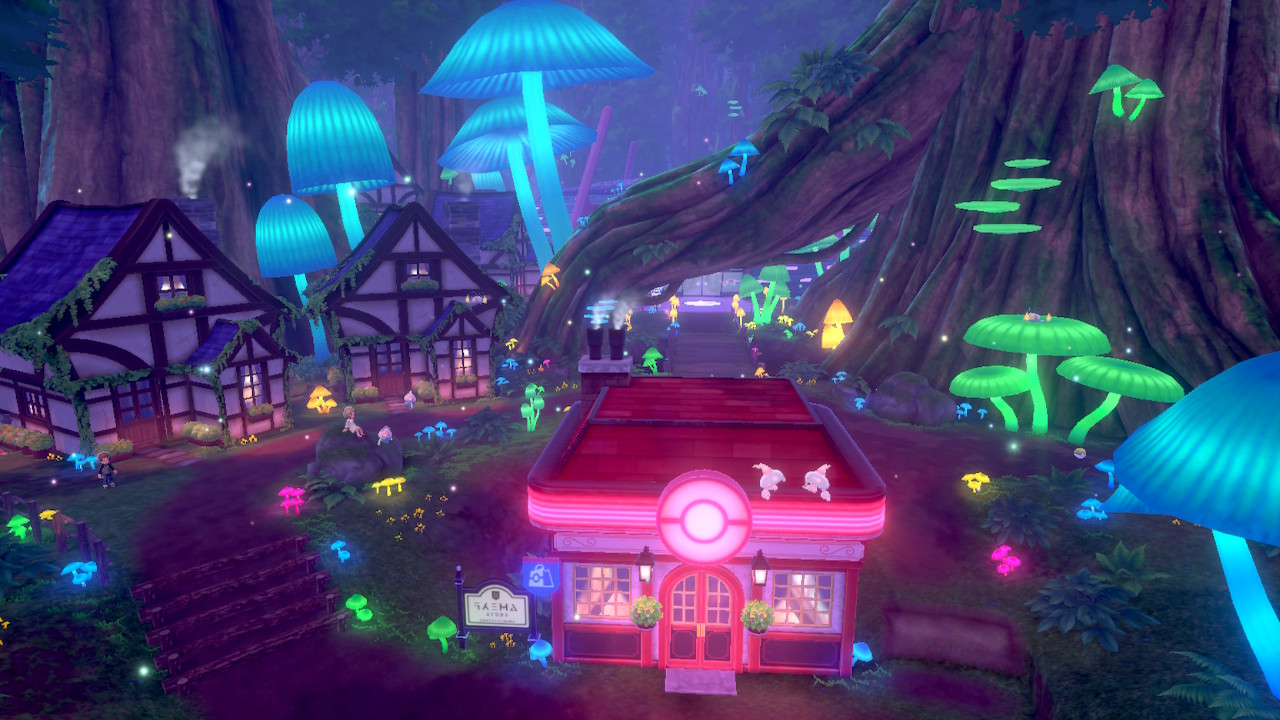 People had an issue with how this game looked? Are you kidding me?

This easy-going nature also seeps into the plot a little bit and by “seeps” I mean “completely fucking drenches it”. The story in Pokémon Sword (And Shield I guess) is your same, basic Pokémon fare that has been playing on repeat for the past couple decades now. You’re a funny little trainer that goes off on a journey to beat 8 gym leaders and become champion of the region and you maybe stop an angry legendary summoned by the CEO of a group filled with weirdos at some point. It’s dry and it’s predictable but, there are a few things I enjoyed about it. For one, the gym leaders in Pokémon Sword (And Shield I guess) are some of my favorites in the entire series. All of them have fun personalities and seeing them ACTUALLY INTERACT WITH ONE ANOTHER FOR ONCE was a real treat. You also earn little cards that describe their backstories and additional connections to the other leaders and it just makes me wish you interacted with them more or even did some extra story missions that let you see them outside of gym battles. Now there IS something in the post-game that lets you do that, but it doesn’t last long at all and you still don’t get to know them all that well. I really wish Pokémon games were longer because these characters could really benefit from extra development. Thank god for Hop at least because he’s by far the best aspect of this game’s narrative. The evolution of Hop’s character is legitmatley fun to watch and I have never cared more for a rival. There’s honestly a lot I want to say about him but I would much rather not spoil it. I think his story is worth experiencing for yourself.

Yo also can these games finally get voice acting, please? The cinematics come off as extremely awkward and I hate it.

I just want to hear these guys talk, man.

Now Pokémon Sword (And Shield I guess) add a lot of really neat things that I hope to GOD stick around for further entries because they make the game so much better. First off it’s the Box Link. Box Link gives you immediate access to your Pokémon storage boxes so you can freely switch out any of the Pokemon in them with your party without having to go back to a Pokémon Center and it’s so good you guys IT’S SO GOOD. I can’t tell you how many times I used it just to grind out a few levels to evolve someone or to grab one with a type advantage that I needed. It’s such a good idea and I’m shocked it took Game Freak this long to add something like this into the game. Now next up is camping and while on the surface it isn’t anything special I can assure you that it really isn’t but I absolutely adore it anyways. I was a big fan of Pokémon-Amie from the 3DS games and while I miss petting my Pokemon I love how you can interact with all of them in one place. I sometimes found myself just watching them interact with each other and playing a quick game of catch with them or GOD cooking curry for us to eat. It’s so cute and it adds so much charm to the game and I hope with further installments they add more play options to it so you can interact with your Pokémon more. Maybe bring back the grooming stuff Sun & Moon? That’d be really cool.

I loved watching these goons.

Now the biggest (huhuh) addition to Pokémon Sword (And Shield I guess) is Dynamax and the Max Raid battles. During gym fights and certain story events you’re given the ability to Dynamax your Pokémon and what that does is that it makes them fucking gigantic while increasing their health and stats. It’s nothing super game-changing on the surface but it adds a lot more to the gameplay than you might think and it gets even better when you get into the raid battles and Gigamaxing. Raid battles are exactly what you think they are. You and 3 other trainers team up to battle against a giant Pokémon and try to catch it and net extra goodies such as rare candies and TM’s. These are fun by themselves but things get REALLY crazy when you find Gigamax raid battles which are not only way more difficult than normal raids but will offer you special Pokémon variants that change appearance when they Dynamax. I was never able to beat one of those raids but I WAS able to get a Gigamax Pikachu because I had a Let’s Go Pikachu save file so………..there’s that.

Overall, Pokémon Sword (And Shield I guess) is a very good game but a very basic one at the same time. It adds a lot of fun and interesting ideas to the franchise but it also doesn’t evolve enough to be truly satisfying. The short length, while relaxing, leaves you feeling a tad unfulfilled at the end and yearning for more story content that just isn’t there even WITH the post-game stuff. Even with these shortcomings I just can’t find it in me to rag on this game too much. Every time I picked it up I found it difficult to put it back down. I wanted to keep traveling Galar and catch more Pokemon, battle more trainers, and cook a SHIT ton of curry. I loved Pokémon Sword (And Shield I guess) and while I do recommend it, please keep in mind that it’s still the same old Pokémon we’ve been getting for years.