I didn’t know it was going to end this way.

Earlier this year I saw the Hero from Dragon Quest get added into Super Smash Bros. Ultimate. That spurred me to finally get into Dragon Quest in a serious manner and I played through the first three games on iOS to prepare myself for the eleventh game, and per a friend’s request. I already knew DQXI was a quality title since it released the year prior but I purposefully waited for the Switch version to come out so I could have access to the exclusive content. After playing it for almost 3 months straight (I’m including the 10 hours I put into the demo version) I finally beat it and I have just one thing to say.

I don’t have to say any more than this. Please play this game. It is an absolute joy from start to finish and it executes everything it sets out to do in a damn near flawless fashion. By the end of this nearly 90-hour journey, I was filled with so many emotions and pure joy that I started to tear up during the credits. I want to express how much I loved this game and why I think each and every person reading this review should play it. 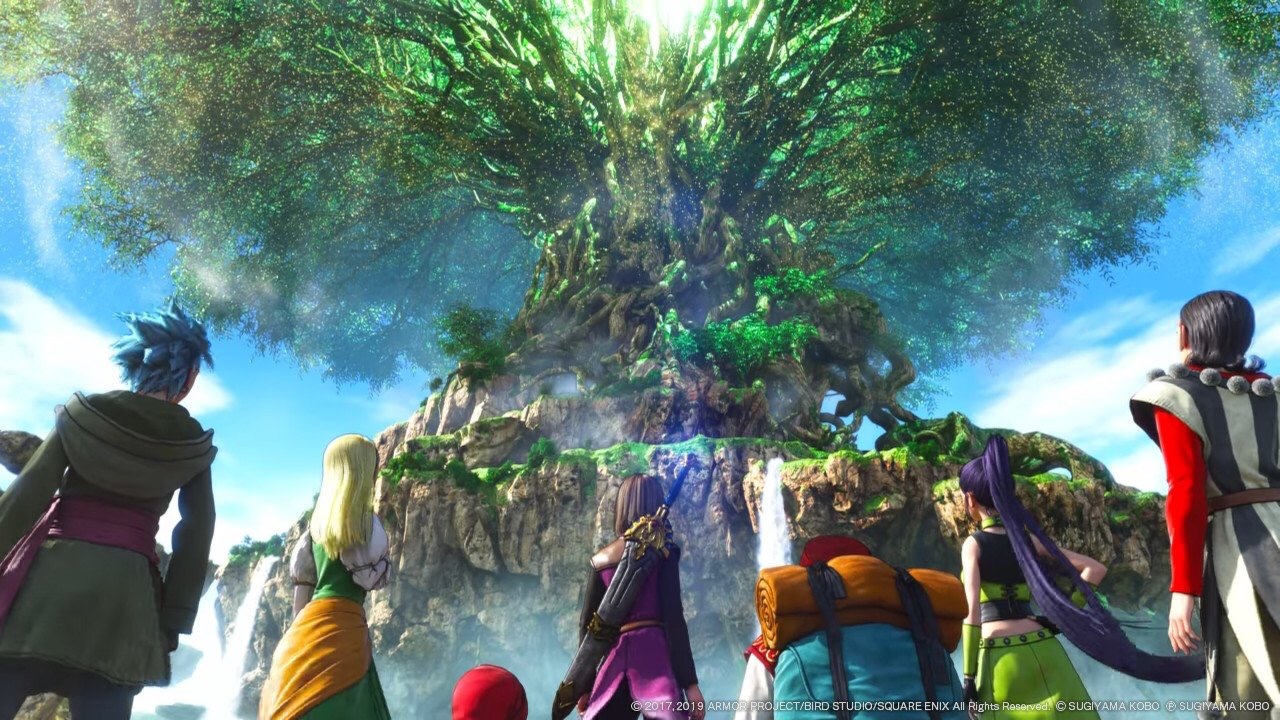 As I stated above, Dragon Quest XI S is an updated version of DQXI which originally released in 2018 (2017 in Japan). This addition adds things such as a party chat feature, the ability to play in 2D, additional side stories featuring party members, and a fully orchestrated soundtrack. There are other additions I’ ‘m sure but many of them are minute add since I never played the original release, I don’t really have a frame of reference to go off of. I will say that as a first-time player this game does a wonderful job teaching you how to properly play it. From the minute it starts the game puts you through several, yet non-intrusive tutorials so you can properly learn the ins-and-outs of the game such as world traversal, forging items, and the abilities you can do in combat. The game also does a great job on catching you up on the story if you’re away from the game for extended periods of time thanks to the small recaps that happen when you boot the game up and the aforementioned party talk feature and let me tell you that was an absolute GODSEND. Like I said there were instances where I was away from this game for weeks at a time so being able to have a quick refresher to bring myself back into the game’s world was super helpful. 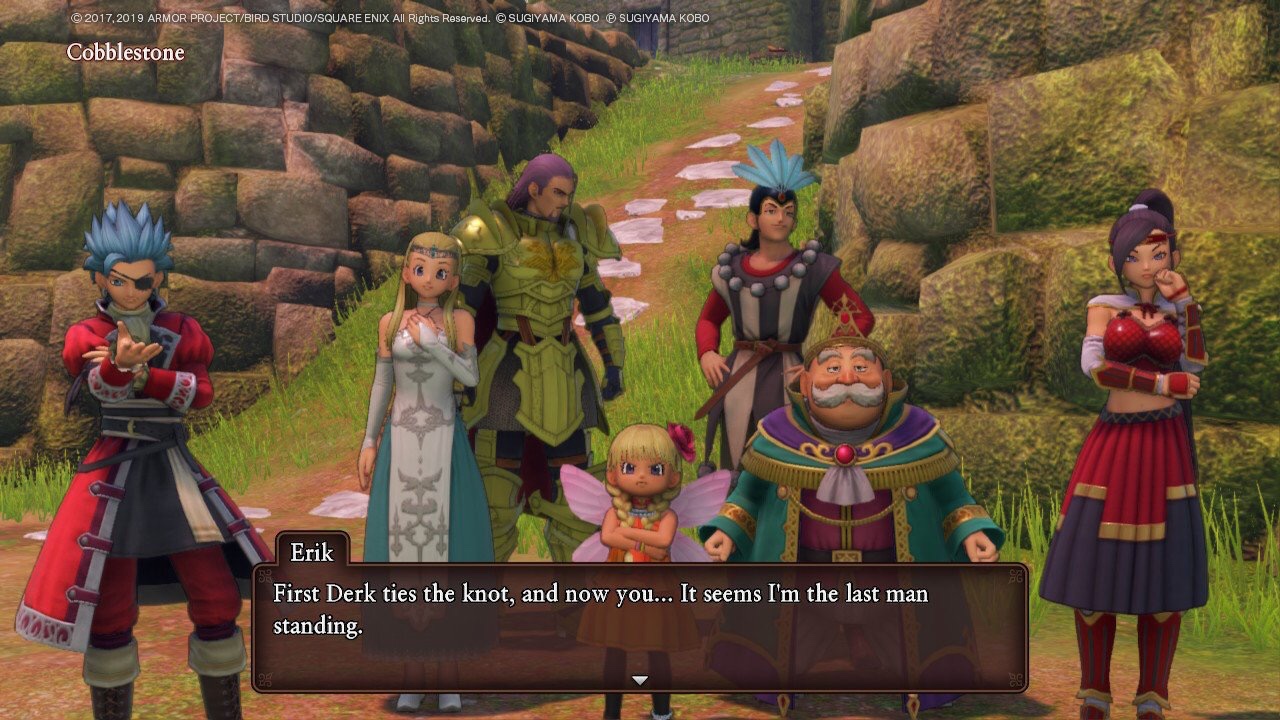 I can’t tell you how many times these guys have helped me remember what I was doing. Also apparently the marriage is a thing you can do in other games so this isn’t a spoiler…..I think.

Another thing I really liked about this game was the combat system because of how finely tuned it was to give off the feeling of teamwork. While the battle system itself is basic on the surface, much like the rest of the game, it gets more complex the more you look into it and it becomes incredibly engaging as result, especially during boss fights. I admit a lot of my praises may sound a bit weird since I’m jumping from the 3rd game to this one but some of these abilities, weapon types, and magic attacks are a ton of fun to use in combat. Maybe it happened in older games but having spells like Kacrack able to hit multiple enemy groups at once is super fun and having specific abilities like Harvest Moon and Cattle Prod able to target specific monster families is super dope. I feel like there’s more to say about the battle system but I’m not the best at explaining RPG game specifics. Hell just looking at the amount of stats each character has makes my head spin because I have a small monkey brain so to keep it simple, the game is fun to play at a basic level but even more enjoyable at a higher level. 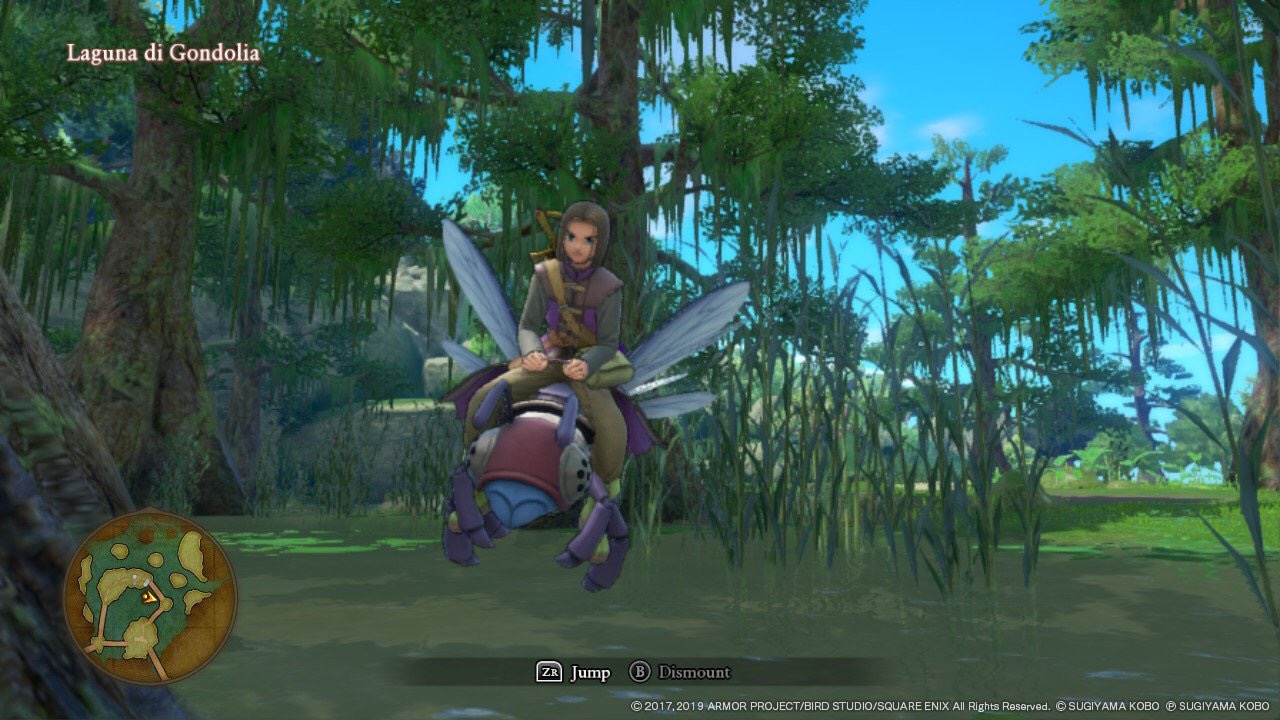 You can even ride certain monsters you defeat!

One thing I wanted to touch upon was the general presentation of the game because, in all honesty, this is where some of my problems with Dragon Quest XI start to pop up. Dragon Quest XI, for being a Switch game, looks absolutely beautiful and vast if a bit rough around the edges at times. Environments are finely detailed and colorful and many areas look stunning but there are a few instances where the textures can look pixelated and A LOT of indoor areas look bland. There’s an area called “The Battleground” that primarily takes place inside large, indoor stone corridors and you’ll get sick of seeing the color blue VERY quickly. Exploring the world can also be a tad boring since you’re very limited in what you can do and where you can go in the overworld and towns. The main character has the STIFFEST jump I have ever used and you barely gain any air time so you can’t exactly go anywhere outside of specific cliffs that you have to press a button to climb. Also, there are invisible walls EVERYWHERE, like, in areas that clearly shouldn’t have them. Sometimes the only indication the game gives you in an ankle-high root blocking your path and it’s incredibly lame. I actually think Dragon Quest XI has the inverse problem Final Fantasy X had. FFXV had a massive world that gave you almost no limit in where you can go but most of the time there wasn’t anything there while DQXI limits you and the world, at least the world it lets you explore, isn’t big ENOUGH. I guess it makes sense that it’s designed this way since it seems like a classic Dragon Quest title just in HD which especially makes sense when you play it in 2D mode, but it was still a tad frustrating to see sometimes.

When this game goes for the fantastical it looks downright gorgeous.

One last thing I wanted to touch upon with the presentation. Before we move on….the music. What the FUCK happened with the music? I know the biggest addition for this version of Dragon Quest XI was the orchestrated tracks but I’m not gonna lie, outside of a few select songs? The original tracks for this game SSSSUCK. I don’t know how Koichi Sugiyama did it because that dude found a way to make a full-blown orchestra sound like a .midi file. Now like I said there are good songs there are. The standard battle theme and a lot of the boss themes are great but then you get stuff like the first overworld theme and the sea-faring theme and they’re so dull and having these awful, grading horns in them and I hate it. A lot of the music is reused too which really threw me off guard and while I get this game was made with Dragon Quest’s 30th in mind (really 31st since it was original released in 2017), it still comes off weird and it gives the game a bit of an auditory identity crisis to me. I appreciate that the Switch release gave us the orchestrate tracks since it does improve some of the less interesting tracks but overall I was severely disappointed with the music in this game. 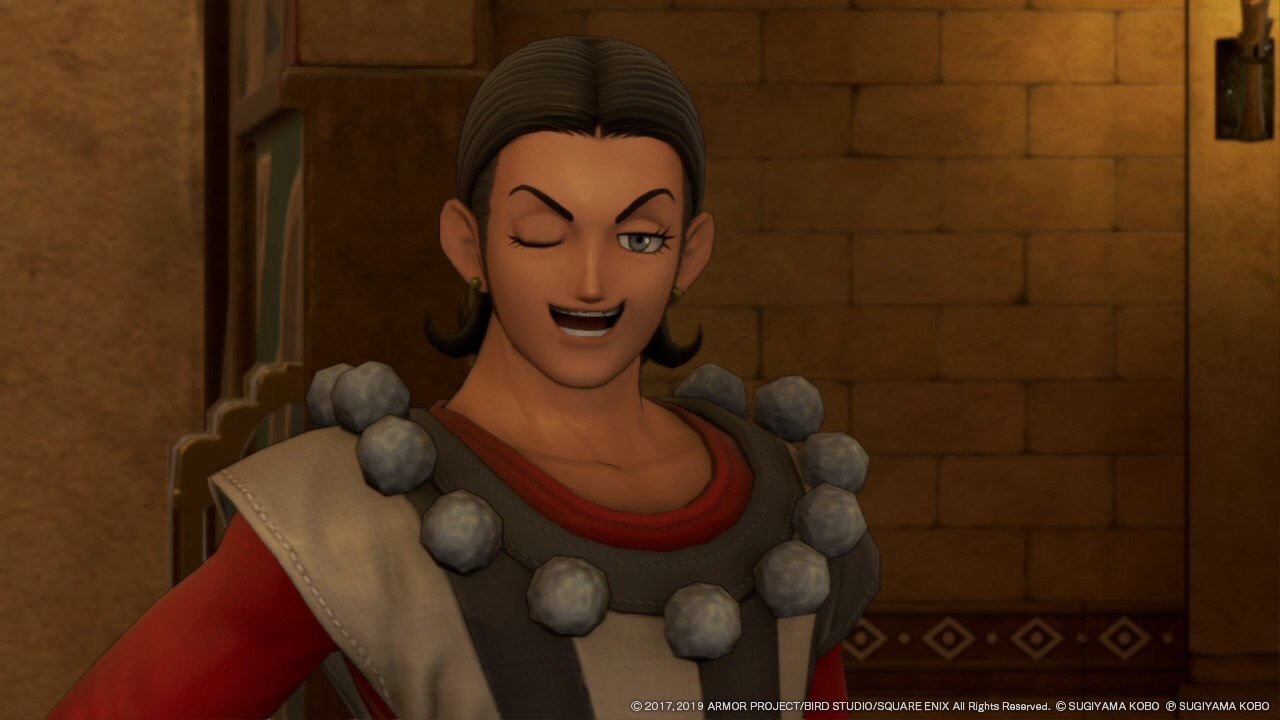 Sylvando at least has one of the better tracks in the game.

Now let’s get to the big stuff. The real reason that Dragon Quest XI is so good and well worth your money. Yeah, the gameplay is good, sure the environments are nice, but all that pales in comparison to one simple thing.

This game is fucking gigantic.

I don’t mean in world size either. I mean this game is filled to the brim with content. My first playthrough took me around 70 hours, which is already extremely large for me, but then we get an ENTIRE POST GAME THAT ADDS HOURS OF ADDITIONAL CONTENT. That’s not even counting things like side quests, filling out the bestiary, finding mini-medals, or good god the Tockle Quests. I couldn’t bring myself to do all of these things because they aren’t personally what I consider to be “fun” but if you enjoy getting the most out of your video games you will be hard-pressed to not find things to do. There are probably countless enemy types and secret bosses I missed and that just plain amazes me. Speaking of that post-game though, that actually brings me to my biggest point of affection for Dragon Quest XI. The story.

From the moment Dragon Quest XI started I was hooked on the world of Erdrea and the life of the main character (who I gave the canon name of “Eleven”). While it starts out as a very basic “hero on the run” storyline and is filled with countless story cliches, it never falls below anything but good. As it goes on the world and its characters grow more and more interesting and lovable that by the time the true ending of the game played I was in tears. There are countless twists and turns and an unbelievable amount of fan service that, even as a new fan, had me smiling from ear to ear. I really want to talk more and more about the plot and how each character resonated with me but to do that would be a complete disservice to the writing and characterization each one goes through. My only real complaint in the story is that the post-game, without giving too much away, does kind of do away with some heavy-hitting scenes that happened earlier in the story but it more than makes up for it with the ending. The fact that I feel apprehension towards talking about these characters speaks to how much I adore them and want people to experience their stories for themselves. If there’s one thing that I took away from Dragon Quest XI at the end it’s that I am going to miss Eleven, Erik, Veronica, Serena, Sylvando, Rab, Jade, and Hendrick with all of my heart

I love you guys so much.

I really hope that anyone reading this has the opportunity to play this wonderful game. It was one of my most anticipated titles of this year and it didn’t disappoint me at all in the areas I was expecting. Sure it has some issues with the overworld traversal and the music but with how good the game is as a whole those should only be considered minor grievances. I’m so happy that I decided to get into Dragon Quest this year and I’m looking forward to going back and playing even more games in this series. It went from being on my radar to being one of my favorite game series’, and Dragon Quest XI has become one of my favorite games of all time. Please play this game. 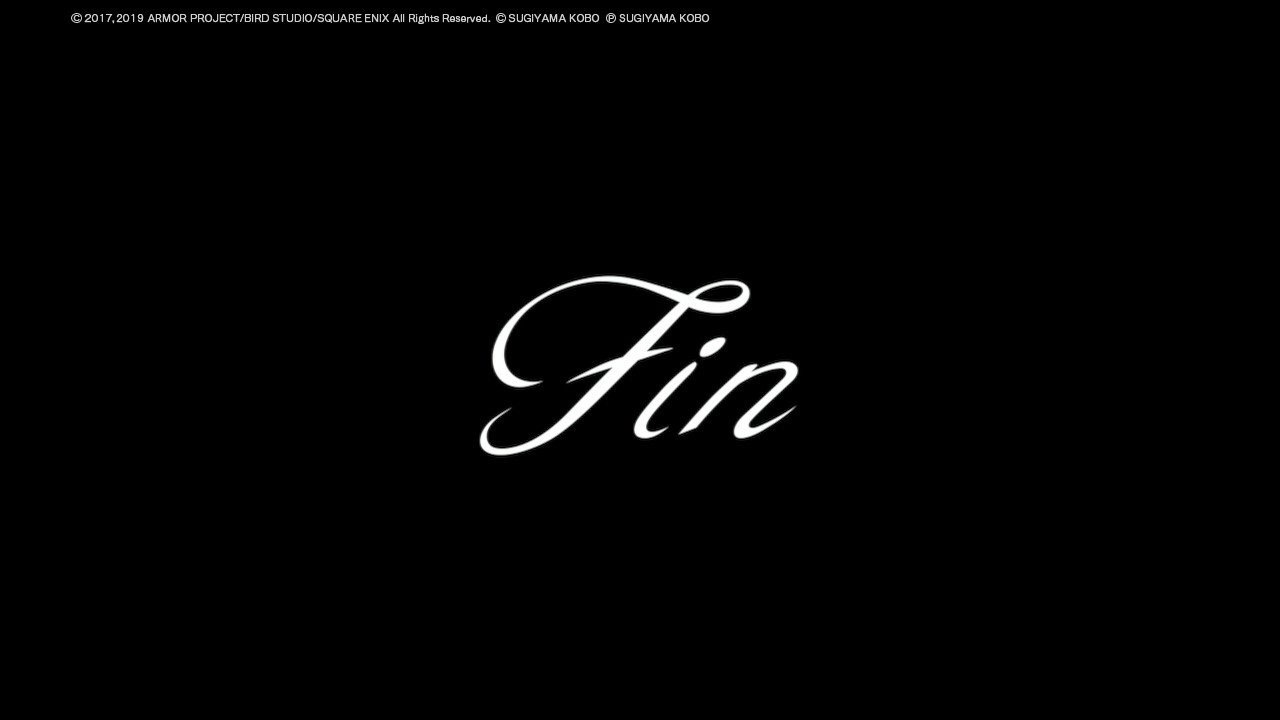