Video games are really interesting products, aren’t they? No matter the quality, they can elicit such a strong reaction from someone, be it positive or negative. They can make a person feel intense amounts of joy, make them feel emotionally attached to its characters and world, and even provoke some to think about the world around them and invoke some truly introspective viewpoints into our society and culture, providing us with a new way of thinking about the world around us.

I’m typing out all of this bullshit to say that I like an exceedingly mediocre video game.

Travis Strikes Again: No More Heroes is a spinoff to Grasshopper Manufacture’s No More Heroes series, a series that I personally adore. No More Heroes 1 & 2 are two of my favorite games on the Nintendo Wii. They’re both filled to the brim with style, personality, and entertainment so when I saw that Goichi Suda (Suda 51) was making a spin-off to gauge interest in a third mainline game, OF COURSE I was going to buy and play it. I was a bit late to the party with this one as I wasn’t able to play it on release and didn’t purchase it until all the DLC was available but I DID see a ton of reviews for the game…and they weren’t great. Many reviewers cited the bland and uninteresting gameplay and uncreative level design as issues and while I admit it did dash my hopes a little bit…it didn’t stop me from buying this game. And after playing it I can safely say….it’s okay I guess.

Rather than play like the original two games, Travis Strikes Again opted for a weird isometric/overhead co-op hack and slash game that’s really kind of dull. You only have a light and heavy attack and 4 special skills you can perform by unlocking skill chips throughout the game. TSA lacks a lot of the visceral feedback the other entries had and not of your attacks really feel like they have any impact and weight to them since enemies don’t react properly to them. The powers can be pretty entertaining but very early on I found a way to basically cheese the majority of enemy hordes and bosses by using a chip that can stun the larger enemies, using another to slow down their movement so they can’t recover as fast, and then use a chip that summoned a massive laser and deal massive damage to them.

No seriously this EATS boss health.

Another issue TSA has is that it’s…not really difficult. Even in single player, I was more or less breezing through the game with ease with the occasional death every now and then. The only time the game actually starts getting challenging is in the final area but that was more because of the annoying and drawn out level design, which the game as a whole suffers from but is REALLY exemplified in the final area.

Speaking of the levels actually, boy HOWDY do a lot of these stages stink. Like I said before a lot of the levels you go through are WAY too long and some have really annoying gimmicks that just make it worse. Also none of them have a real sense of identity. Every stage is supposed to represent a certain type of video game genre like a beat ’em up or an RPG or whatever the hell “Life is Destiny” was supposed to be. The problem is that all of them outside of ONE STAGE IN PARTICULAR THAT I WON’T MENTION DUE TO IT BEING REALLY COOL aren’t proper representations of what they’re supposed to be since they all play exactly the same.

What game is this supposed to be?

Now I’ve done a lot of complaining in this review, really more than I usually do….so why did I say I like this game? Really, it all comes down to the story and writing and in my opinion….is enough to warrant a purchase of the game.

The story of Travis Strikes Again follows Travis Touchdown hiding out in Texas after the events of No More Heroes 2, trying to seek out items called “Death Balls”, which are cursed video games that were never released. He then gets visited by Badman, a fellow assassin and father to Bad Girl who was a boss in the first game, looking to kill Travis to avenge his daughter. During their fight, they get sucked into the Death Drive Mk.II and have to fight their way out of the game world. After they get out Badman learns that collecting the Death balls can resurrect his daughter so they both begrudgingly help each other. While this plot sounds fairly basic…it’s because it is. BUT ALSO the main game isn’t where the majority of the story is. THAT would be in Travis Strikes Back.

What this mode is, is a visual novel styled game mode that shows how Travis is acquiring each Death Ball, it also provides some background information for the cursed game console itself as you start to learn more about the creator, Dr. Juvenile (You also learn more by receiving fax messages from a mysterious man named K). These segments are filled with so much charm and clever writing that I was just playing through to game to see more of them. They’re also filled to the brim of fanservice since they bring in characters from almost all of Suda51’s work such as Kamui Uehara, a major character from a game called The Silver Case. It’s really cool to see such an extreme level of fanservice for people who have played all of Suda’s games.

I mean….I haven’t. I’ve only played No More Heroes, but it’s still really cool to see! 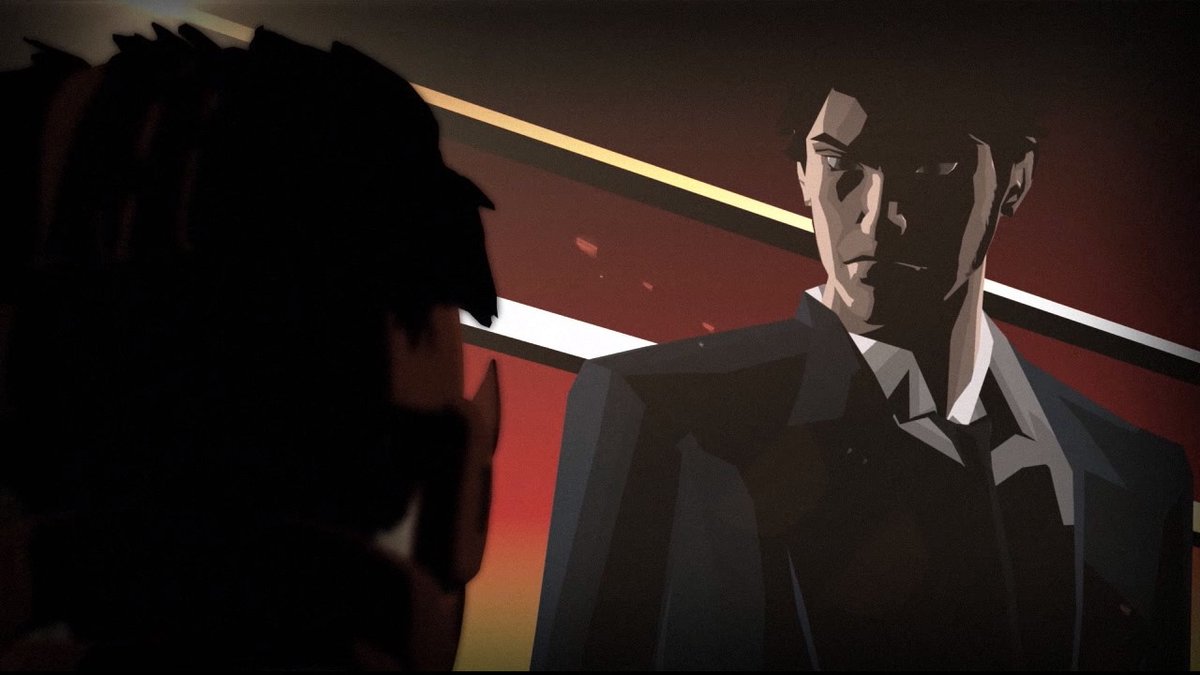 They added one of the main characters from Killer 7 into the intro of the game in a patch.

I really can’t stress this enough. The story and writing for this entire section is so funny and filled with genuine heart that it’s amazing. Even the boss dialogues you get during the main campaign are wonderful. Before and after each fight you get to talk with the boss and a lot of them are filled with some…pretty serious stuff and oddly enough, a lot of humanity. The ending to the main story too is so..IT’S SO GOOD YOU GUYS, IT’S SO FUCKING FUNNY. I LOVE IT A LOT. 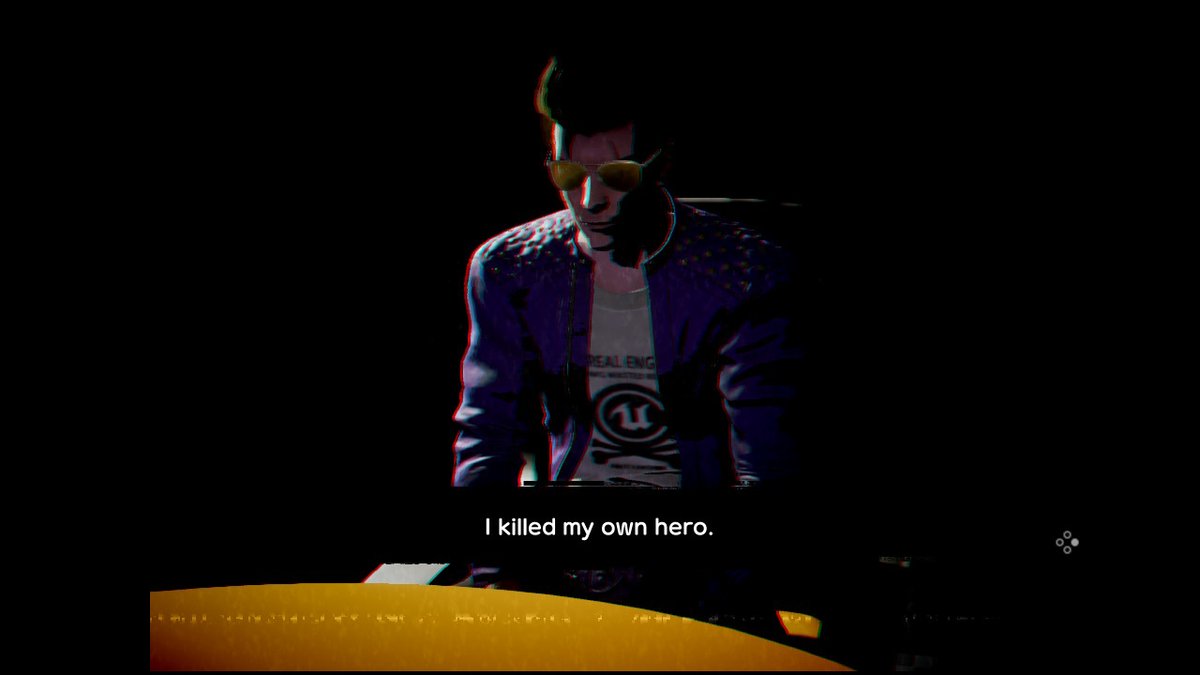 The story doesn’t stop with Travis Strikes Back either. BEcause of the DLC (Which was included free with the game if you bought the physical version) you got an extra story in the form of Badman Strikes back….you also got Shibou as a playable character but she plays exactly like Travis and Badman so it doesn’t really matter. Badman’s story mainly goes through his backstory and why he ended up the way he did but you also learn about how Bad Girl became an assassin. It’s honestly really sad and….kind of weird for No More Heroes to take itself so seriously but it’s a really nice and fun thing to see. Adding onto that you also get a new level and extra Travis story content with the Bad Girl DLC which is just as good as the main games and even has…A REALLY INTERESTING DEVELOPMENT WITH THE MAIN SERIES OF GAMES…..you also unlock Bad Girl so that’s cool I guess.

This whole level is hard as hell, by the way.

Overall….it’s REALLY hard for me to figure out how to recommend this game to someone. On the one hand, it’s so middling and boring that it’s almost not even worth experience but on the other, the story is absolutely top notch that I can’t make up my mind.

Buy Travis Strikes Again. Honestly I don’t care that the game itself sucks the story is so good you guys it really is. buy it used or wait for a sale. I GUARANTEE you No More Heroes 3 is going to reference this game a lot if that’s any consolation. Oh my god they’re making No More Heroes III.

I’ll just leave with this piece of dialogue from the game that is solid GOLD.