THIS REVIEW IS BASED ON THE NINTENDO SWITCH PORT….TRUST ME THAT’S WORTH PREFACING.

Before I begin, please look at this real line of text that exists in this game.

I was very excited for Team Sonic Racing when it was announced. I was a MASSIVE fan of Sonic & Sega All-Stars Racing Transformed and while I lamented the exclusion of Sega’s other properties (I miss you every day, Beat), I was still interested because I wanted to see what else they could do with the gameplay. After playing it for a very…VERY long time I can definitely say that the game is incredibly fun and does a lot of really interesting things for a kart racer but it’s very bogged down by a lack of variety in the game modes among other things. Let’s start off with how the game plays. 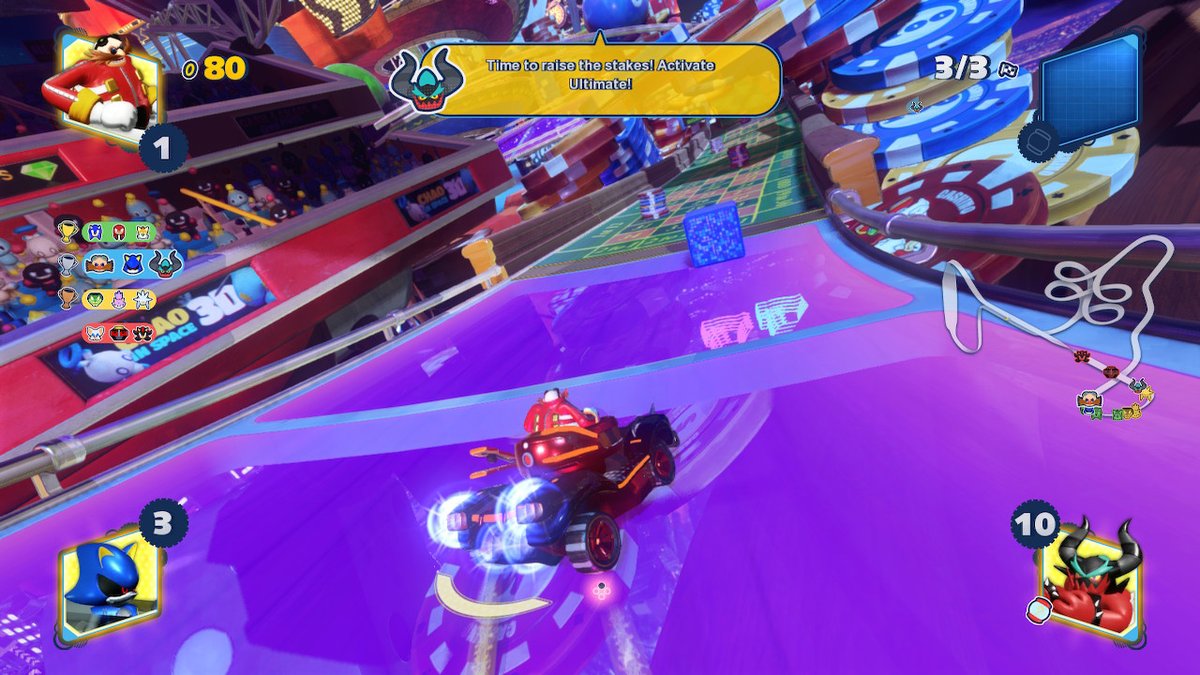 Team Sonic Racing is more or less an evolution on Sumo Digital’s previous Sonic Racing games. It retains the same drift and trick heavy racing style the series has been known for and it feels just as tight and fluid as ever. The drifting still feels satisfying to pull off successfully and the game still has a great sense of speed. This is also helped by the fact that all of the racers feel different from each other, each having their own pros and cons so that way every character can appeal to someone, even Zavok! 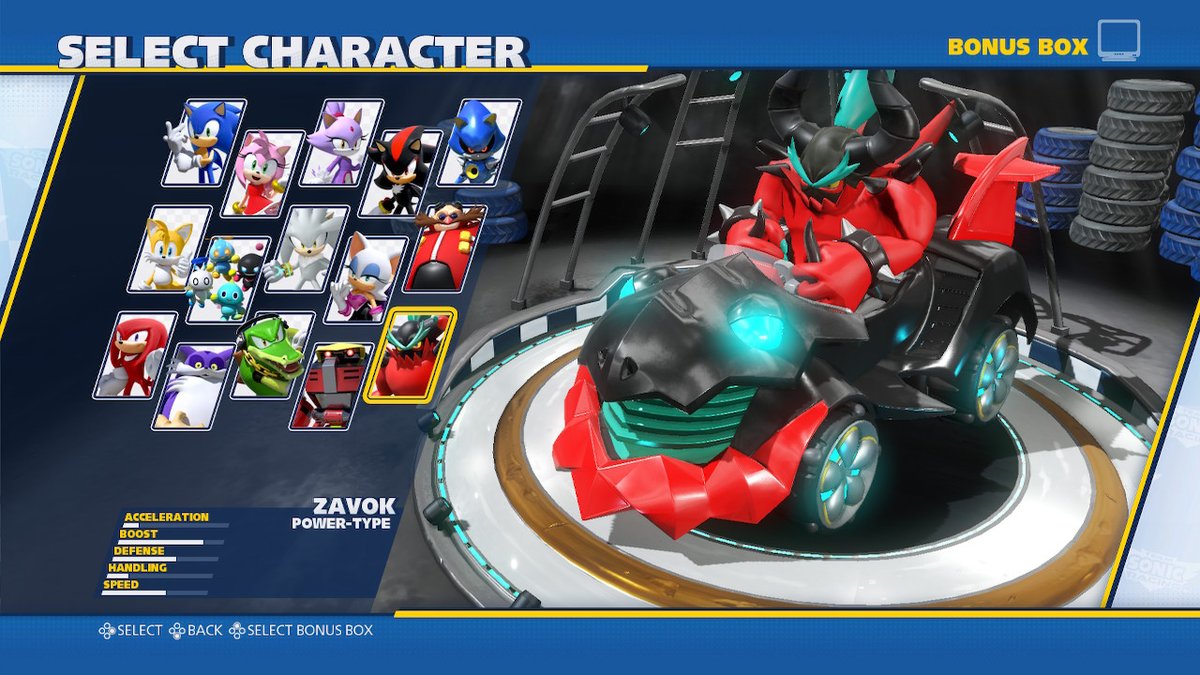 The biggest new addition to this game is the “Team” aspect of it. The races can have up to  4 sets of 3 person teams that all have to work together in order to win. Throughout the race, you not only have to focus on getting further up in the rankings but also helping your teammates out so they can get higher as well. The team member that’s the furthest ahead leaves a slipstream across the raceway and if a racer on the same team rides on top of it for a certain period of time they’ll get a huge boost of speed. You can also save team members from spinning out by giving them a “skim boost” so they can get back into the action. You can also send out and request item boxes from teammates and all of this helps build your “Ultimate” meter so you can perform a “Team Ultimate Attack” which gives you a MASSIVE boost of speed and makes you invulnerable for a short time (Outside of pits of course).

You want to make sure you work well with your team because even if you get in 1st place, you aren’t guaranteed a total victory as each team members position is tallied up for points so if they’re near the bottom you will still lose the race overall. I actually really enjoy this aspect of the game as it adds a nice level of strategy and multitasking that makes the races feel much more involved.

Be a team player or get left in the dust.

My only real gripes with the gameplay is that the weapons you get are really dull and sometimes finicky to use (The Rocket Whisp can’t decide if it’s homing or not) plus weapons like the rock and lightning ones are extremely difficult to dodge, lightning being outright impossible unless you have invincibility. Also, there are glitches.

Many of the tracks that have small ramps sometimes experience collision and physics issues after doing tricks off of them, causing you to flip upside down and lose all your speed. HOWEVER.

THAT PALES IN COMPARISON TO THE NUMBER OF GLITCHES THE SKIM BOOSTS HAVE CAUSED.

There have been several, S E V E R A L instances of the skim boosts not only giving you way too much speed causing you to just go flying across the tracks like a rocket, I also experienced some that just cause you to go flying backwards.

While the glitches can be very annoying, especially online, it’s not something that I would consider deal breaking. These are all things that can be ironed out with future patches and even then, the gameplay is fun enough to over shadow this. But as to what you use this gameplay for…….

Team Sonic Racing only does the bare minimum in terms of single and multiplayer content. We have a story mode, local and online multiplayer aaaaaaaaaaaaaaand that’s it! Story mode houses many of the extra modes such as ring collecting, survival, daredevil, and Eggpawn Assault but very few of them are actually…fun. Daredevil can be extremely frustrating to get even a silver medal on due to the strictness of the drifting distances, as can the ring collection one. The best one, in my opinion, is Eggpawn Assault since it’s the one with the most engaging action….at least until you realize you can camp by the item boxes and just hit them with missiles until the game tells you to stop. Overall these little mini-games are kind of boring.

Multiplayer doesn’t really fare much better. It works, sure but outside of a few special races there isn’t really much to it. The matchmaking, at least on the Switch version, is rather rough and when the races start the performance essentially gets a bat to the knees. Racers are jittering and vibrating all over the place and the frame rate cuts in half, which is slightly annoying since the Switch version of Team Sonic Racing already doesn’t run at 60fps. This isn’t to say that the base frame rate is bad per-sea, as it runs the exact same in both tv and handheld mode, but when an already not-so-smooth game runs even not-so-smoother, it gets a bit unbearable. Online is still a lot of fun with friends as most things are but it’s still not as polished as it should be.

They weren’t kidding when they called this “Team SONIC” Racing.

The story is mode is also…fine I guess? It’s mainly a series of races and mini-games without any frills. All of the dialogue is told through portraits and pre-race interactions and while it’s not flashy, it’s entertaining enough. Most of the main cast gets some fun bits of dialogue and it helps make the rather bland story much more tolerable. It could have done with more variety and maybe limiting which racers/teams you can use for each mission. Various cutscenes focus on select characters and it would have been more interesting if you could only select them for special missions, or even have a separate story mode for each team, which would have made a lot of sense considering how much of Sonic Heroes is represented in this game. Overall though, it’s fine. While there isn’t a whole lot of variety there are still a ton of challenges to do and doing all of the goals for them will help you earn parts for the games customization mode and BOY lemme tell ya…

This is the best part of the game by FAR oh my god. The number of car parts, paint, and decals that you can earn is staggering. All of the parts make each vehicle look so different from their base versions and the fact that they add and subtract from your stats really opens up so many possibilities to how you want your racer to control. Also having the ability to mix and match characters color schemes with other characters is super dope, ESPECIALLY when you unlock the pallets that are based off of various Sonic levels. The main way that you earn these customization parts are by doing the aforementioned challenges or by putting coins you earn by playing the game into a gacha machine and randomly getting them. I really can’t stress this enough this is my favorite part of the entire game.

This plays a remix for “Can You Feel the Sunshine” by the way and it rules.

One more thing before we finish, I think the presentation of this game is sloppy as hell. While the visuals and music are all top notch the menus are just…basic and listless. The racing portraits are all awkward looking .jpgs, the super meter can be a tad hard to see since it blends in with the other special effects, there’s no way to differentiate friendly projectiles from enemy ones, the GOD AWFUL main menu, it’s all very bland. 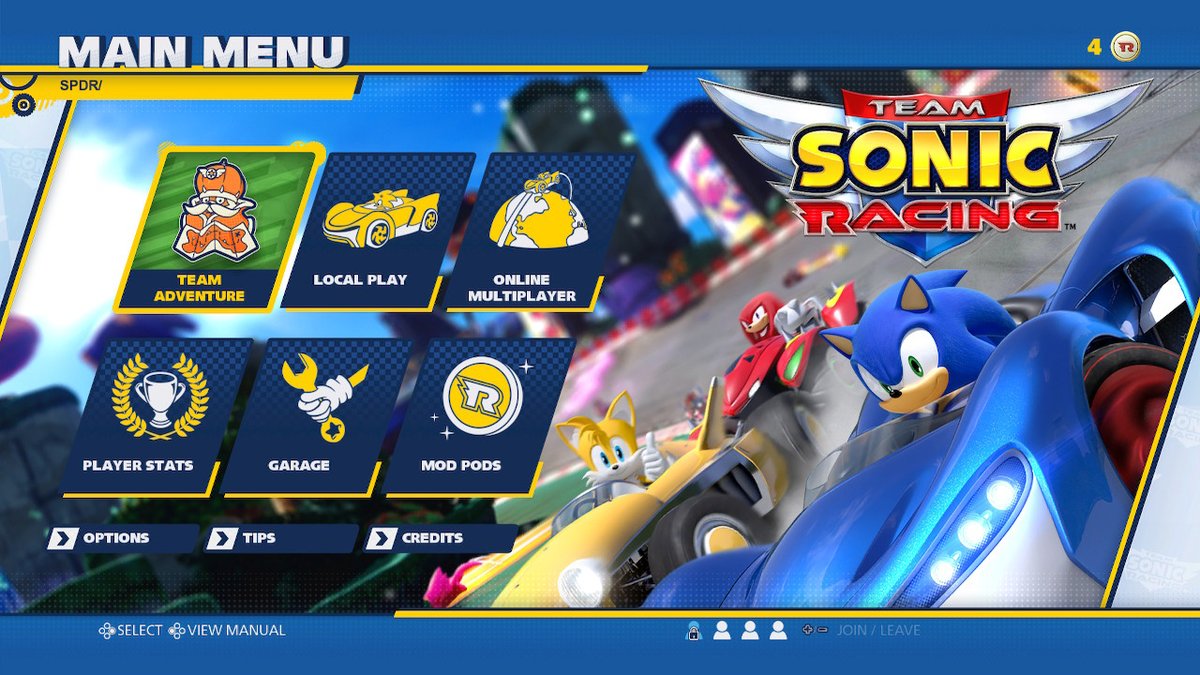 THOSE ARE JUST THE CHARACTER SELECT RENDERS PHOTOSHOPPED INTO THE CARS

The worst part is that the Switch port doesn’t even include the opening cutscene and Sega has said that they have no plans on adding it in via patch due to “cartridge size” limitations. It’s a shame because it’s a very fun cinematic.

Overall while I’ve had a ton of fun with Team Sonic Racing, it’s very hard not to look past its flaws. If you’re looking for a fun racing game I DO think it’s worth the budget $39.99 price tag and there’s a lot of fun things to unlock and play, but you aren’t going to get much out of it aside from the normal races, which are like I said, extremely fun. If you’re a Sonic fan or a fan of kart racers definitely pick it up but if you’re only casually interested..maybe wait for a price drop.