Review-Power Rangers: Battle for the Grid

*This is based on the Nintendo Switch port

I’ve been out of the loop for everything involving Power Rangers for well over the decade but it’s hard to deny the impact the series has had on me. Like most people I grew up with the series original run, Mighty Morphin’ Power Rangers, and I absolutely loved it as a kid. It made me (unknowingly) grow an appreciation for the tokusatsu genre and I lovingly kept up with it for many years, stopping at around S.P.D I believe. Even though I’m a little rusty with my Power Rangers lore I was still very interested in Battle for the Grid when it was announced. The idea of a Power Rangers fighting game always interested me and it seemed like it was being developed with a similar gameplay style of Marvel vs Capcom and the early footage looked pretty promising, if a little unpolished. Now that the game is out and I’ve had some time with it I can safely say that it’s a lot of fun!…..But BOY is there a lot wrong with it. 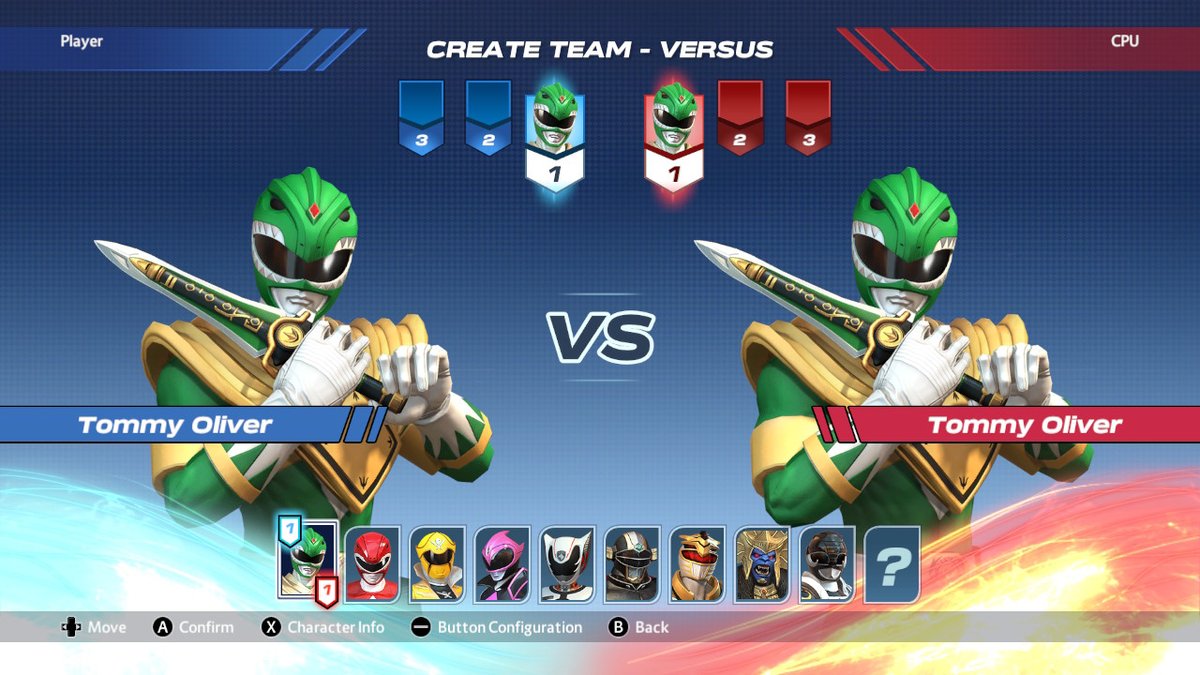 Let’s start with this…..

One thing that immediately caught my eye was that the roster was fairly small, which isn’t a thing that usually bothers me but I noticed the majority of the roster consisted of characters from MMPR. I guess that’s fine if you’re a fan of that series but Power Rangers has been going on for over 20 years now and we only have 3 characters that aren’t from that series and I can see that turning a few people off to it. From what I’ve heard from friends that are still in the fandom this is a problem that has plagued the series for a long time now and it’s rather unfortunate, hopefully the upcoming 3 DLC characters can add rangers from other series…maybe even A BLUE RANGER? THERE ISN’T A SINGLE BLUE RANGER IN THE GAME.

COME ON AT LEAST PUT THIS DUDE IN….

Outside of the roster though there’s a notable amount of cheapness that permeates throughout the game. It’s fairly clear not a lot of time was spent into the visuals and audio because it’s very messy. 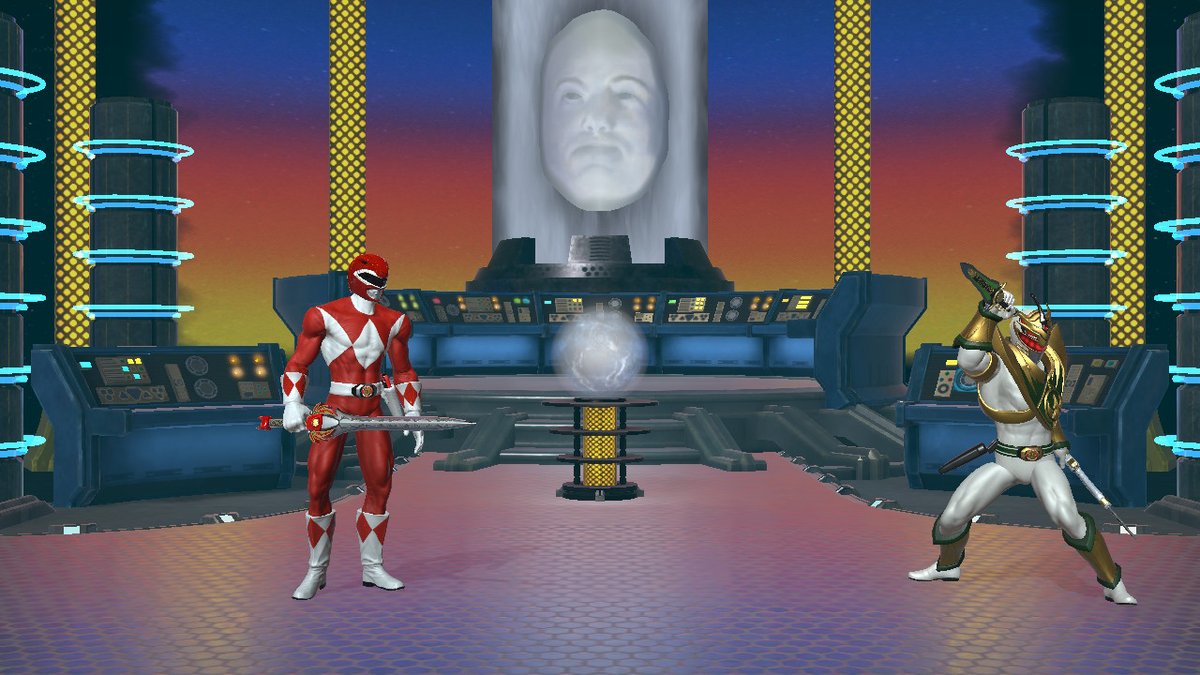 This is a good stage from a video game released in 2019.

While the models themselves look fine (I think they’re the same ones from Legacy War but I’m not too sure) the stages are very bland looking. Many of them sport pixelated textures and jagged geometry and they look like they’re an entire console generation behind. The audio mixing as well is really off putting because many characters DO have voice lines…kind of. I think I heard Goldar say “Lemme at ’em” once, but everyone’s voices are so low it’s hard to hear them. I also had several instances of sound effects not coming out or even flat out disappearing for like 15 seconds. Speaking of glitches I DID record one instance of one of the animations for the Green Rangers moves not playing and each hit spark would slowly come back one by one and it was really weird (This is it if you want to see it). The menus and general UI are also really bland, not really having any flare to them. But you know what does have flare? The gameplay. 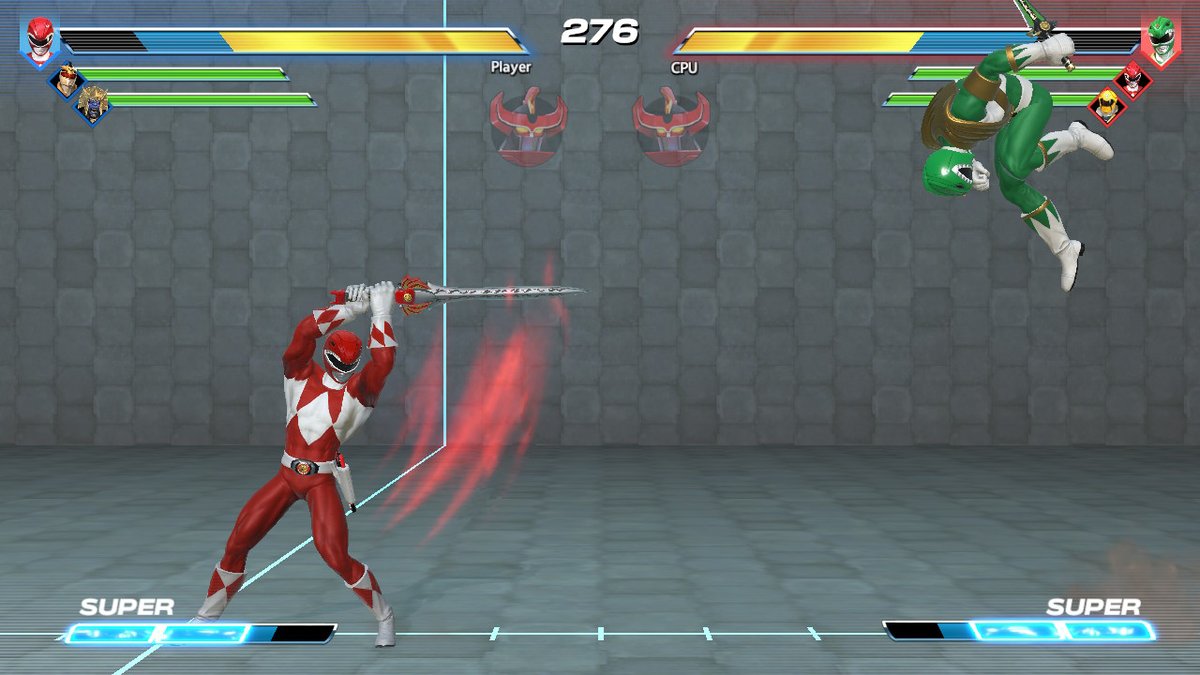 Oh my god, dude oh my GOD THIS GAME IS SO MUCH FUN.

Battle for the Grid is a 3v3 tag team fighter and it’s just as chaotic as it contemporaries. While it may have a simple control scheme (3 attack buttons, one special button, and two assists) the game let’s you go absolutely wild in regards to how you play it. The combo system is so open and, admittedly a tad busted, that you can essentially string together whatever attack and assist you want. Pretty much any character can work on a team if you play smart enough and the amount of damage you can get out of the cast is staggering. Every member of the roster plays completely different from one another and it helps keep the game fresh, anyone playing is bound to find a group of characters they enjoy playing.

On a gameplay level alone this game comes highly recommended and I’m super stoked to see how the upcoming DLC characters play. But that’s the thing though, while I recommend it purely based on its gameplay…does that make it worth the asking price? That one is actually kind of hard, While the game itself is super fun there isn’t really a whole lot to do. There’s ranked and casual online, training mode, versus mode, and an arcade mode but that’s really about it. There’s no survival, no trials, no challenges, there isn’t even a way to invite people to play games with you since there aren’t any lobbies.

This is what the endings in arcade mode look like.

Because of this the $20 asking price might be a little hard to swallow for some, even more so with the $40 collectors edition. Honestly what it comes down to is that if you’re willing to overlook the middling presentation and the lack of modes, there’s an extremely fun fighting game here with a lot of stuff going on mechanically. But if you’re hoping for a bit more out of your package maybe wait for a price drop or to see if they patch in some new gameplay modes. All I know is that I personally love Battle for the Grid and I can’t wait to sink my teeth into it more.