WARNING: THERE WILL BE SPOILERS IN THIS REVIEW.

Gore has always been a touchy subject for me in media. I’m squeamish about it in real life, really everyone is, but I’m fine with it in things such as video games and literature..but not in film for some reason. I might just be the act of seeing grotesque things happen to a real person but I could just never get over it and because of that I was too afraid to check out a lot of films exploring body horror caused including David Cronenberg’s The Fly remake. And I wish I hadn’t, because after watching this movie it became one of my all time favorites. I love this movie A LOT.

The Fly tells the story of scientist Seth Brundle (Jeff Goldblum) and reporter Ronnie Quaife (Geena Davis) research. What started out as way to elevate both of their careers eventually blossoms into romance and the two quickly become infatuated with eachother, much to the dismay of Ronni’s editor and ex-boyfriend John Getz (Stathis Borans). Eventually due to a drunken mistake, Seth tries to teleport himself and unknowingly becomes genetically fused with a fly and starts to change both physically and mentally, all of which culminates in a GREAT final act where he fully completes his transformation into the “Brundlefly”.

I was completely caught off guard by The Fly. What I thought was going to be just another a gore filled cautionary tale about the dangers of science turned out to be a melancholic story of a couple broken apart by a single drunken accident….with added gore at the end. The chemistry between Seth Brundle and Ronnie Quaife is both heartwarming and heartbreaking and it’s fascinating to see their lives unfold throughout the film and it’s only elevated by the actors performances, ESPECIALLY Goldblum’s. Goldblum plays Seth perfectly and he comes off as really sympathetic as well as demented and it might be one of my favorite performances by him. Geena Davis is great in the film as well, showing off a wide array of emotions and she really starts pulling your heartstrings the more distraught she becomes. The only character I can really complain about is Stathis Borans character. He’s extremely sleazy and he never once comes off as likable nor is he really redeemed, at least in my eyes. Another thing I didn’t really like was the ending and how abrupt it is. [MAJOR SPOILER-SKIP THIS PARAGRAPH IF YOU DON’T WANT TO BE SPOILED] It ends with Ronnie mercy killing Seth after trying to fuse with her and their unborn child but after he’s shot the movie just sort of ends. I read that there were two epilogues that were planned to be in the full film, but audiences didn’t really grasp onto them so they were removed but they were later added as dvd extras. With that being said though I really commend The Fly for taking its time to develop Seth and Ronnie and show how they both change throughout the story. But if there’s another thing I can commend this movie for it’s its special effects. 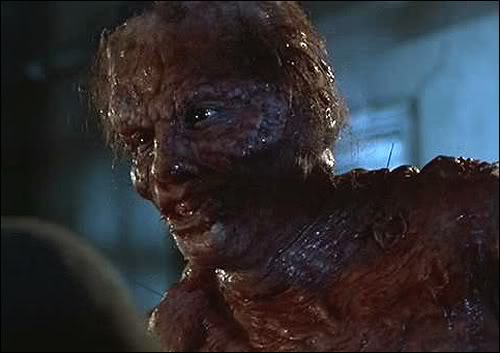 This is where it’s at.

I’ve never seen a Cronenberg movie before The Fly but if they’re even half as visually disgusting as this movie is, I’m sold. The makeup and animations in this movie are absolutely grotesque and horrifying but at the same time they’re mesmerizing. They look fantastic with so many little details that just makes it all look worse. The entire Brundlefly transformation sequence is the highlight of the movie. I don’t even want to think about how much time and money went into making that sequence look as good as it did but I’m glad they did it because t really does add to the movie and it’s easily its greatest strength. (It even won an academy award for it!).

In conclusion, while there are one or two small cracks in this movie they don’t even come CLOSE to holding this film back. I think this movie is a masterpiece and I’m so glad I sat down and watched it. I cannot recommend The Fly enough. I’m surprised I wasn’t overly squeamish about the gore in this movie, maybe I’m getting better at digesting it in film!