WARNING: THERE WILL BE SPOILERS IN THIS REVIEW.

Friday the 13th is a horror franchise that always fascinated me as a kid. I remember thinking Jason Voorhees as an imposing wall of terror covered by a hokey mask. Even though I was never into horror I still wanted to see the movies he came from which I suppose speaks volumes of the characters staying power. Little did I know that his first movie didn’t even have him as the main antagonist (Well, not technically, anyway).

The original Friday the 13th released in 1980 is considered by some to be apart of the the start of the modern slasher genre, along with Halloween and The Texas Chainsaw Massacre. It helped paved the way for more films like it and it launched the start of an immensely popular franchise that has a following to this very day.

Too bad the movie is boring.

Friday the 13th is filled with boring protagonists, monotonous pacing, an understandable yet weak villain, and above all else a lack of scares. That’s not saying there aren’t great things in this movie, far from it actually. Betsy Palmer and Adrienne King deliver some pretty good performances, the score by Harry Manfredini is suitably chilling , and the gore effects by Tom Savini look great. However even with the things this movie does right it still doesn’t really do it for me in terms of making me scared.

The story of Friday the 13th is about a summer camp that’s located in a wooded area called “Crystal Lake”. The camp gained controversy due to a child drowning in 1957 and several other horrifying events, such as the murder of two camp counselors and the camp burning down. As the camp prepares to reopen the counselors are slowly picked off one by one by a killer stalking them in the shadows. After an admittedly long intro sequence we’re introduced to the group of counselors that are running the summer camp and it’s here that we’re introduced to our first problem. One of the main issues that Friday the 13th suffers from is its lack of likable or memorable characters. We only truly get to know one of the main characters, and that’s Alice Hardy (Adrienne King). Alice is by FAR is the most developed character as she has the most screen time and is the only character that acts like she doesn’t want to be there. Adrienne King also gives a great performance and the scenes where she’s almost manic with fear look believable. Outside of her though NONE of the characters much time to develop themselves and only really exist to add to the body count. Luckily the killings are all super entertaining.

As stated before, Tom Savini was the lead behind Friday the 13ths special effects and even though I’m not overly familiar with his work, I was thoroughly impressed. Each of the kills, both on and off screen, are a joy watch. One kill in particular that springs to mind was the bed kill Kevin Bacons character is just sitting in bed smoking after having sex with his girlfriend and the killer stabs him in the neck through the bed with an arrow and it’s gruesome. The dummy they used is a little obvious but it still gets the job done pretty well. The stinger music the harsh violins also elevate the mood to an almost panic inducing state and it’s easily one of the strongest aspects of the film, it’s just too bad there aren’t too many on screen deaths.

After more and more of the counselors get killed Alice is the only one left alive. This is where we’re introduced to Pamela Voorheese (Betsy Palmer) who at first, seems like a sweet, helpful old woman who wants to help Alice. It’s after this though where it’s revealed that Pamela is responsible for not only murders at Camp Crystal Lake, but all of the horrific events there. She’s doing it as an act of revenge because her son Jason was the child that drowned in 1957, and she believes she’s acting on his will, even muttering to herself in a child’s voice. THIS is an understandable motivation for her actions and it makes for a scary antagonist…..if we knew about her before hand. She just shows up out of nowhere and we’re expected to act shocked at the reveal when we knew nothing about her to begin with. If she was a character that was introduced beforehand, THEN this revalation would have more of a shock factor to it, and it’s a shame because Betsy Palmer is FANTASTIC as Mrs.Voorheese. The way she justifies her actions by talking to Jason is genuinely unsettling, I just wished she was  more developed character.

Now there’s one more thing I wanted to talk about and it’s the ending because, no joke, it was the hardest I have ever laughed during a movie in my life. The movie ends with Alice decapitating Mrs.Voorheese with her own machete and spending the night in the middle of a lake on a boat. She wakes up to the police finding her and just as you think the credits are about to roll, JASON pops out of the water and drags her under. THIS was the one time I jumped during the movie because it comes out of nowhere and it would have been the PERFECT way to end the movie.

Expect that it doesn’t end.

Alice wakes up in a hospital bed with a police officer asking if she remembered anything. When she asks about “the boy” the officer says they didn’t find any boy, and all Alice has to say is that he’s “Still out there….” and she LOOKS DIRECTLY AT THE CAMERA AND THEN THE CREDITS ROLL. 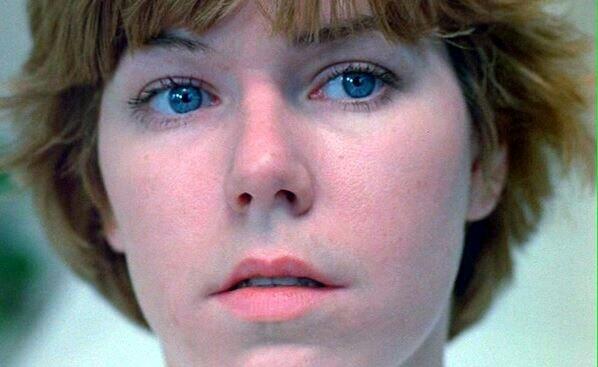 This stare. This stare threw me into a laughing fit so hard I started crying. I couldn’t BELIEVE how much a copout ending this was. It was one of the funniest things I have ever seen.

All in all, while aged and pretty dull, Friday the 13th is still a good film and is still an important part in film history for help establishing the slasher genre and bringing it into the mainstream. I’m hoping the rest of the series is more memorable, but I don’t regret watching this movie. As someone not overly familiar with horror, I think this is a great entry point into the genre.